Today is Anti Slavery day 2018 and nearly a year to the day that we set off on our Guinness World Record breaking attempt to be the first people to ever circumnavigate the globe on a scooter with a sidecar. In that time, we’ve been using our scooter and sidecar to raise awareness of modern slavery and human trafficking wherever we can. We kicked off our awareness raising with our ‘London to Paris Rally Against Modern Slavery’ and since then we’ve been talking in schools and linking up with community groups all around the world to spread the message.

The journey so far has taken us through 27 countries and we have had to drive, drag and push our ridiculous vehicle through some of the toughest environments on the planet.  We must admit that after we’ve broken down in the desert again or we’re pushing the bike up a mountain pass at 5000m above sea level, we sometimes wonder why on earth we carry on doing it. Well here’s a list of the people who have kept us inspired to keep going through their undying dedication to fighting modern day slavery:

Cornel and A21 – After visiting Cornel at the A21 office in Cape Town she took us for a surf at her very own surf school. A business she set up that gives a percentage of its profits to A21, to fund the fight against modern slavery. A21 do all sort of stuff to fight modern slavery and they are all about inspiring others to join the fight. Cornel works to build teams of modern abolitionists across Africa who raise awareness to help prevent people getting trapped in to a life of slavery. Read more about Cornel and A21 here.

Ivan, Frederick and Utopia 56 – Ivan and Frederick are a couple of guys who dedicate their time to helping refugees and migrants on the streets of Paris. Since the closing of the Calais Jungle, the streets of Paris have been populated by thousands of desperately vulnerable people trying to start a new life in Europe. Ivan and Frederick work for Utopia 56 which is an organisation set up to help this vulnerable community and in doing so they protect people from being trafficked in to a life of slavery across Europe. Read more about how that works here.

Click and Melissa – We met Click at a community centre in Athens. We were there at a storytelling workshop trying to meet some local people while we waited for our bike to be shipped. Our task was to tell a story to a random person we were partnered with. Matt was partnered with Click. To his amazement Click went on to tell a story of how she had been a guerrilla fighter, a victim of human trafficking and a founder of an organisation that supports vulnerable refugee and migrant women who could be trafficked in to slavery. Read more about her story and Melissa, the organisation she founded, here.

Nicole and EL Pozo de Vida – We met Nicole in North America’s biggest city – Mexico City. She’s originally from the states but has been living in Mexico city for the past 6 years fighting modern slavery with El Pozo de Vida. Nicole and El Pozo de Vida are faced with the challenge of trying to help free the estimated 300,000 people trapped in slavery in Mexico and they have to do it in an environment in which they are threatened by organised crime gangs and restricted by laws that limit how much they can help. Read more about their work here.

Rifaat and PLACE – We met Rifaat in Khartoum, Sudan. He founded the People’s Legal Aid Centre to fight for the rights of poor people in one of the most impoverished countries on the planet. His organisation works in incredibly challenging situations to educate people about the risks of being trafficked and to represent those who have been trapped in modern slavery in Sudan. Read more about Rifaat and PLACE here.

Priya, Michelle and New Friends, New Life – We met Priya and Michelle in a coffee shop in Dallas and they told us about how they are trying to take down a $99 million industry in Dallas – sex trafficking.  They work to support victims of human trafficking on the streets of Dallas and try to free the estimated 400 girls trafficked every night in their city. Read more about the work of New Friends, New Life here.

So along with many, many others, they’re the people that keep us moving. We’re collecting money for the organisations listed so why not help them continue their fight by donating on our fundraising page here. 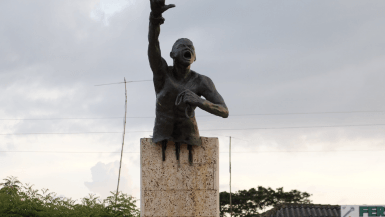