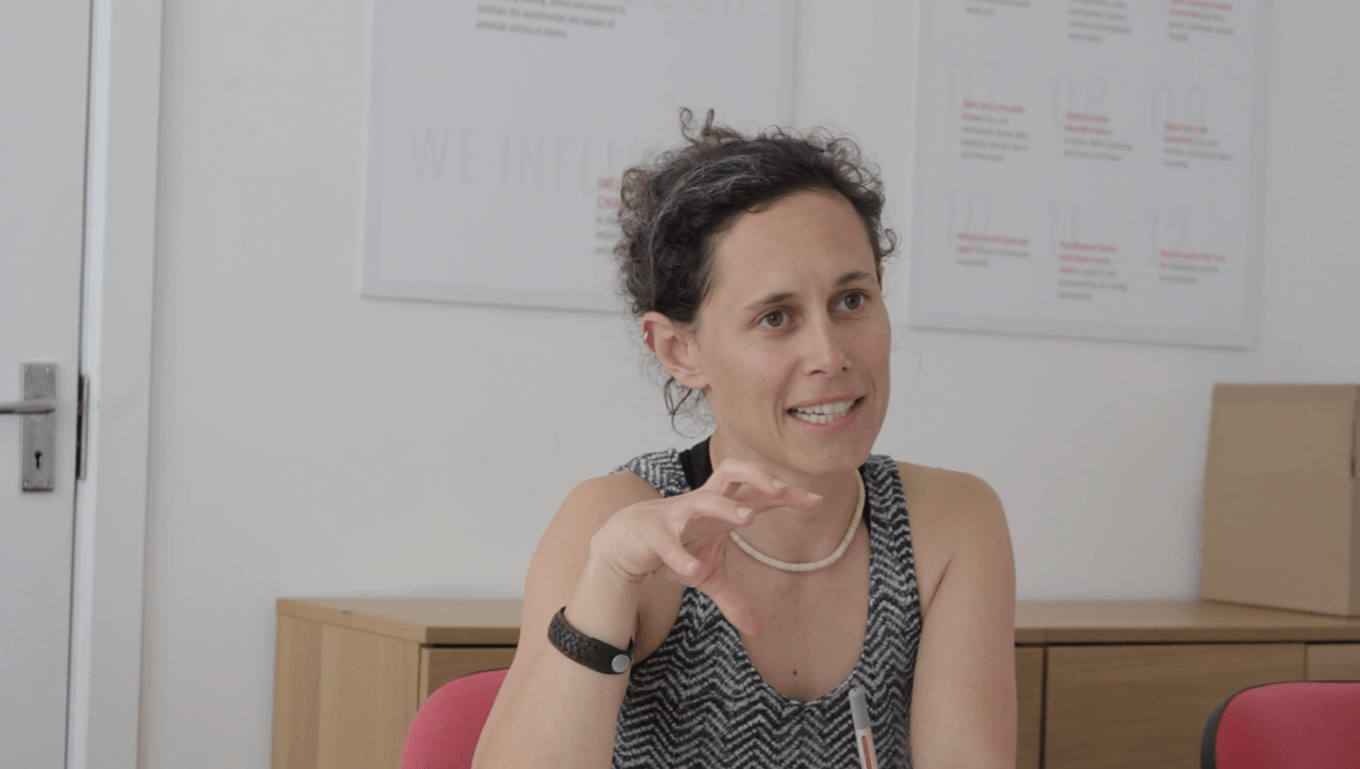 Interview with Kate Garbers, Managing Director and Co-Founder of Unseen

On our world first, circumnavigation of the globe we are aiming to raise awareness for the fight against Modern Day Slavery. Slavery exists in every country on earth, including the UK. We thought that while we’re here we should learn a little bit more about slavery in the UK and the organisations that are fighting it, so we went to visit Unseen in Bristol and met with Kate Garbers, Managing Director and Co-Founder of Unseen. Here’s how it went:

Unseen is an antislavery organisation and a non-governmental organisation and our mission is to work towards a world without slavery. We do this in 3 ways, we say we try to equip, support and influence. So, when we talk about equipping we do a lot of front line training of front line professionals to understand and spot the signs of slavery and trafficking and understand how to respond. When we talk about support we are talking about direct services to survivors. So we run a women’s safe-house, a men’s safe-house and also a resettlement service. The safe-houses are 24/7 and once people move out of there we then help resettle them in to the community, so we work with them for a bit longer as they are living in and around the South West. And we’re due to open a children’s project later this year so again a safe-house for children. Then we say by influencing we realise that as an agency on our own we can’t tackle this issue so we need to collaborate with law enforcement, with government, local and national, with the EU, with local authorities, with other statutory organisations, to make sure that we come together to look at which bits agencies should be doing to stop the issue from occurring in the first place. So, I think we appreciate that our support side is a bit of a sticking plaster, in that the issue has already occurred for people and you need to then kind of try and put people back together again and get them back to resilience, empowerment and independence. We do a very small part of that on their journey but ideally we want to work to a situation where we don’t have to have safe-houses anymore. So quite a lot of the work we do with businesses is to look at their supply chains and to understand where it might be occurring in their supply chains so we can start unpicking that. To ensure that in 25 years’ time I don’t retire saying wahoo we’ve got 25 safe house. Instead I can say we were able to shut the safe-houses because we don’t need them anymore because the general public and the government actually did enough and recognised that it was an issue and changed the way that we approached the issue – so that’s our overall aim is to do ourselves out of business. The other thing we do is run the Modern Slavery Helpline and that is a 24/7 helpline that anyone from law enforcement, front line agencies, members of the public or potential victims themselves can call and get help.

I can probably give you a few indicators of what to look for but with the caveat of exploitation and abuse takes many, many forms so you won’t always be able to tick of every single indicator but also with the caveat that lots of law enforcement agencies know bits of the picture so if you have a concern, its far better to call that in to the Modern Slavery Helpline and they can share that information with other agencies. So generally, indicators, if you’re thinking about people, you could look at the behaviour of people, whether people are withdrawn or scared or not willing to speak to you or if they’re serving you in some way or if they don’t speak English or can’t understand you, especially in the service industry. Then you could look at their appearance. Are they unkempt? Do they look like they have access to hygiene facilities?  Do they look like their clothes have ever been washed or cleaned? Things like inappropriate clothing for the working environment. We see slavery occurring tin the UK in the harvestry industry, in the agricultural industry, in the hospitality industry, in the construction sector, are the people that are working in those industries suitably clothed and do they have the correct equipment? Are they nervous of the authorities? – again that might be hard to tell as a member of the public. Some people might be living in overcrowded accommodation so we find that people are usually put in incredibly dirty and cramped conditions with often no sanitation. Lots of people coming and going from one house. Times of travel is always interesting: it’s that kind of – “Oh, I always see that van turning up at number 75 and 4 people kind of get out, then 12 people get in and they arrive at 6 in the morning and come back at midnight” – so that kind of unusual travel times and unusual numbers of people coming and going from a property and that indicates the lack of freedom that somebody has and the control of somebody so someone is kind of picking them up and taking them to and from work and controlling their movements.

Okay so slavery is definitely a global phenomenon so what we see is, if you can’t get things done cheaply here you can get them done cheaply somewhere else. So I do think there is a kind of inextricable link to what we want here and do here has a knock on affect down the supply chains. I think for the UK market and someone living in the West it’s really hard to see that when you buy a t-shirt for £3, can it ever have been made for £3? By the time you have paid someone’s salary by the time you have shipped to the UK, put it on the shelf etc etc.  And I think we have probably lost the understanding of what things cost. I think for me the hardest thing with slavery is that realisation that each and every one of us is linked to this issue because of the things we choose to buy, so technology, clothing, if you purchase sex, the services that we engage with, we want our nails painted, we want cheap beauty products, we want our cars washed. Cheap sex, cheap labour, we are all inextricably linked to that if we purchase those things so for me one of the main issues is that how do we get the community and the general public to realise that actually we are involved in this, just because we don’t see it when we are walking down the street, actually its happening and the items that are being produced are finding themselves in the shops that we shop in and I think it takes us to stop and think hang on a minute how can that only cost that much? And it is happening all around us: there’s a proliferation of car washes, a proliferation in nail bars you can walk down a high street and see both of those things and I would challenge anyone if you think people are being paid fairly if you think a £5 car wash can pay someone’s salary.

What drives you personally to fight slavery every day?

I would say I get really frustrated by injustice and I learnt about this issue when I was working in a Ukrainian orphanage and I was chatting to a little boy that I had been working with via a translator. I learnt that he and his mum had been walking down the street one day and a car turned up and three guys got out. Two of the guys flanked his mum and the other guy took him to get an ice-cream and when he looked around his mum was getting bundled in to the car and that was the last time he ever saw her. Now at that time I hadn’t really engaged with the issue of trafficking, I didn’t really understand what slavery was. At the time Slavery wasn’t even a term, it was 2008 so it was all about sexual exploitation and violence against women, trafficking was known as a thing against women and girls and it just really stuck with me that this little guy who I was working with in an orphanage had his mother took away from him to goodness knows what and there he was. His life was now going to be under a state system of an ex-communist country that wasn’t going to be great and there was an injustice there that made me kind of go I need to look in to this and the more I learnt the more I became horrified that humans were treating each other like this, that kind of commodification of people for the purpose of making money and the more I learnt the more I couldn’t believe people we’re doing this to each other. And yet the more it was obvious that it was and where was my connection to that and what was I doing that might help proliferate that and it was that moment of learning about an issue that was so unbelievably horrific that I felt I needed to do something so we decided to start Unseen…I think kind of my desire to help people and my absolute horror at injustice and the way that people were treating other people is kind of what drives me and then seeing our staff teams doing such amazing jobs with people who are absolutely spiralling out of control and free falling and everything in their life is being completely obliterated and watching our incredibly skilled teams working 24/7 in such a dedicated way to get those people back on an even keel and to help them reach independence and I think that’s what I love about Unseen is that we know what part we need to play and that part isn’t to hold on to a survivor for ever, it’s to celebrate when they’re happy to step out on their own and it’s to celebrate when they’ve reached a position of independence and resilience and they continue with their life and on their life journey without a label of being trafficked and I’m so proud of everything the staff do to facilitate that and I think that’s a really, really special thing at Unseen.

You can watch the full interview with Kate below or learn more about Unseen by visiting https://www.unseenuk.org.

If you have any concerns about something relating to modern day slavery in your area, you personally need help or if you just want some more information, you can call the Modern Slavery Helpline on 08000 121 700.