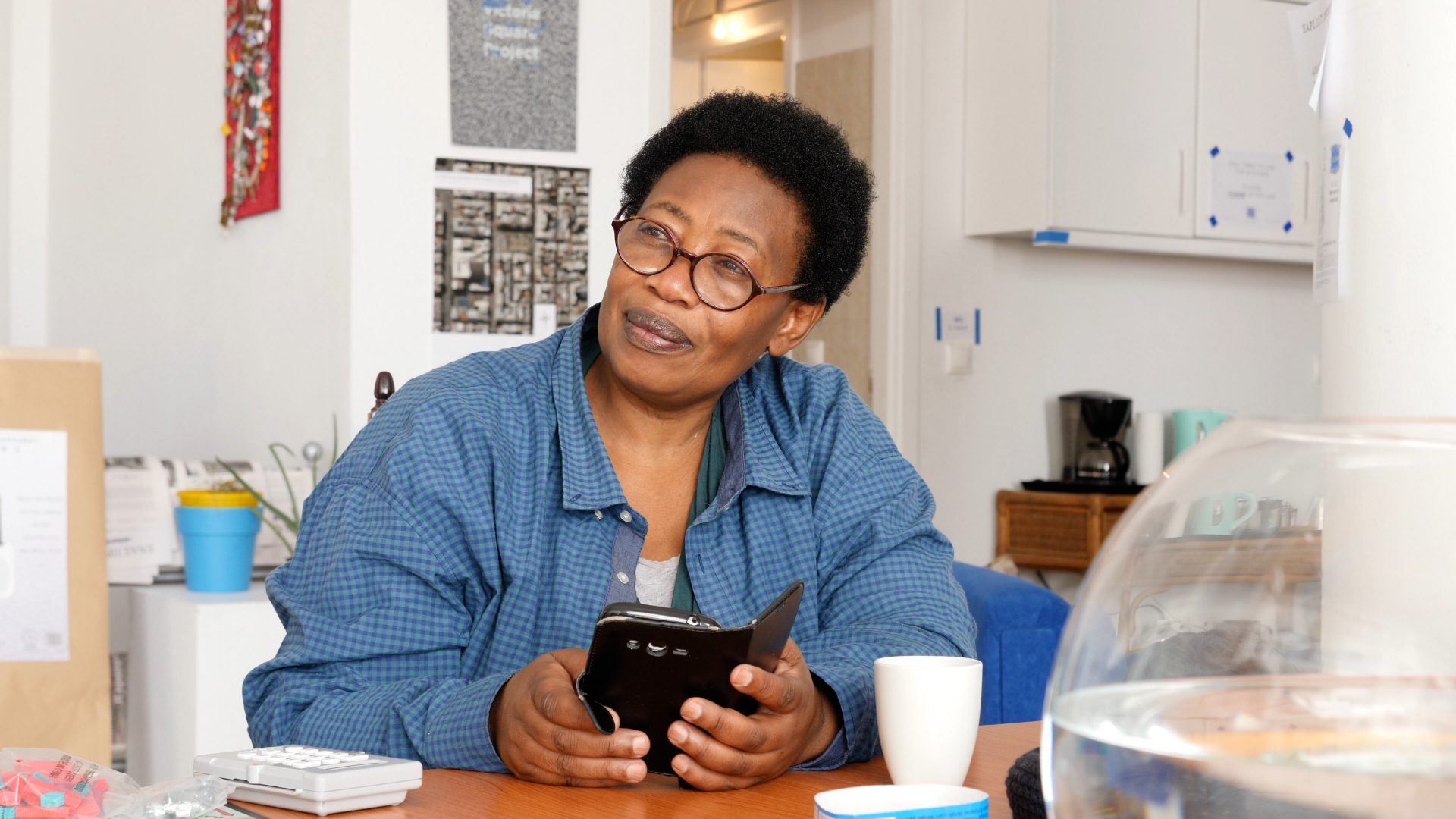 We met Click at a storytelling workshop ran by Narrative 4 here in Athens, she had many, many stories to tell. We arranged to visit Click to learn more about her unbelievable life story. It’s a tale of a normal girl who found herself fighting as a Guerrilla soldier. A soldier who resigned even though it meant prison. A wife who became a widow. A mother of two sets of twins. A talented artist who became a slave in a foreign country. An incredible woman who achieved her dream despite all the odds.

We’ll try to tell you the whole story eventually but as the project is all about raising awareness of modern slavery we thought it was important to share Click’s story of how she became a slave… and how she got out. Here’s what happened in her own words:

“I started doing this knitting and embroidery to earn a living, so I was selling them…So I sold some of my embroidery to one family from Greece. They loved my work and then they asked me if they could send me to Greece to learn traditional Greek embroidery. So that I could go back and work for them. That’s how I came here. So, when I came here, actually, they didn’t send me to school. I found out when I was here that these people they are trading girls – taking girls from Africa and they sell them to some other Greeks, to work for them in their houses. So that is what they did. So, when I came they started sending me to some houses to do some house work and they take money.

They said, “oh, we are still doing your paperwork for the time being”.

I knew that this is the thing which is happening. So, I said okay, “let me play cool”. Because if I try to speak up they can do something bad to me. I have children. I don’t want my children to lose me. So, I started being patient with them. So, one day I went to Thessaloniki to go and work there. There was a lady. She was a family friend. They were having a party, so somebody needed to go there to do everything. To do the dishes, to serve the people.

So, when I came back to Athens, the lady, after two weeks came to Athens to visit the family, and she asked me, “are you happy here?”.

And I could not say because she is a family friend so otherwise she would go and tell them.

So later on, she said, “No, I know” – so she asked me – “did they give you the money which I gave them for you when you came to Thessaloniki to work”

And I said, “no”. That is when she felt very bad and started crying.

She gave me her telephone number and said, “if you need anything you call me”.

So, these people when they were going out they were locking me in the house. Whenever they go to work I stayed in the house and I am doing the housework. And you know the Greeks they have this system of playing cards at night and they need someone, a girl, to empty the ash trays and serve the coffee throughout the night. So that is what I was doing – and they’d send me to different houses.

And I had no communication with my children. If they write a letter or if one of my relatives write a letter, they were not acknowledged – they take the letters and tear them up and I never knew. So, one day one of the sons lost the keys to the house.

So, they said to me, “if you find the keys, you give them to us” – I found the keys, I didn’t give them. So, one day I tried the keys at the door and it worked. So, I kept the keys.

So I called the lady [from Thessaloniki]. I said, “I am ready to leave”

I said, “I’m just ready” because I didn’t know anyway. For two years. Two years, I was in prison.

She said, “Okay I’m going to send my son, he’s coming to pick you up”. So, the son drove from Thessaloniki and he came to get me.

There were no mobile phones or anything, so I was watching from the balcony and waiting. And then he came, and I left with nothing. Only the clothes which I was wearing. And then I left.”

Click spent two years as a slave doing domestic work here in Greece. After she got out of slavery Click stayed in Greece as it was too dangerous for her to return to her home in Zimbabwe.  Click eventually got the help she needed to start a life for herself here and has worked tirelessly to fulfil her dream of using her talents in knitting and embroidery for work. She now has her own shop called Clicks Collection check it out here. She also does a huge amount of community and voluntary work and co-founded the Melissa Network. Incredibly, she’s also freed five other girls who were living in slavery by literally turning up getting them in a taxi and driving off. A truly incredible lady.