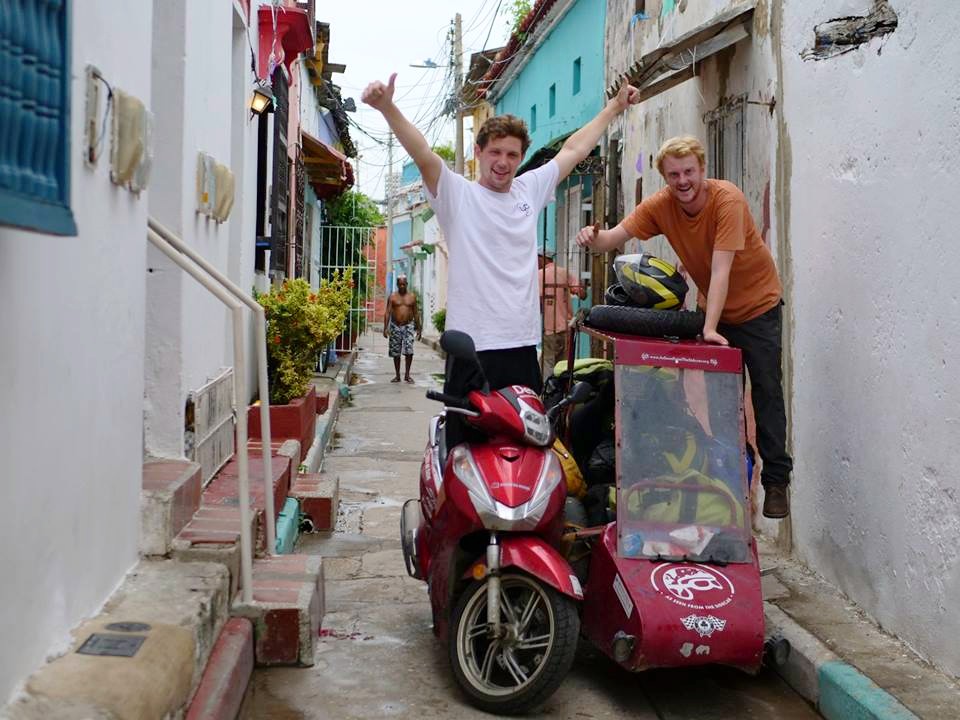 We’ve made it to Cartagena!

We had a super busy couple of weeks heading from Quito, Ecuador all the way through to Cartagena on the North coast of Colombia.

The journey was 1120 miles and although we’re emailing you as a recap from two weeks we actually did those miles in 7 days. It was a mammoth journey and not without it’s challenges.

The first leg was from Quito through to Pasto, Colombia. The border crossing was pretty quick and there were no problems either side – something we were pretty pleased about as apparently there had been a couple of kidnappings in the region recently. We arrived in to Pasto in the evening and the next day we were planning to head through to Cali. During the night we experienced our first ever proper earthquake. It was a 4.9 on the Richter scale but the epicentre was only 20km away so it seemed absolutely massive. Our survival instincts kicked in and we hid under our bed sheets until the aftershocks ended. A genius decision.

In the morning we cheesed it on towards Medellin but literally hit a bump in the road just 40km out of Pasto. We hit a stone and cracked our sidecar wheel. If you remember, we smashed the sidecar wheel up on the Lagunas route from Chile in to Bolivia and had to have it welded back together in Uyuni. Well, that weld popped out as a result of the impact and left us stranded on the side of the road. We tried to plug the hole with Quick Steel but it was too big so we ended up having to hitch a lift with a passing transporter lorry. It took hours to catch the lift and we only managed to get one thanks to a lovely guy called Juan and the local police – who were all completely baffled by the two incredibly sun-kissed gringos stood next to this weird red vehicle thing. 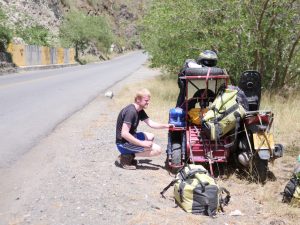 We spent the next 48 hours trying to fix the wheel in a local town before giving up and returning to Pasto by bus to buy a replacement. This hiccup meant we now had the best part of 1200km to cover in 3 days in order to get to Cartagena in time to ship the bike. This was fine and we cover that much ground regularly but when we arrived at the Steel Horse (a bikers hangout in the Coffee growing region), we were informed the main road north was closed and we’d have to go via the coast. This added another 200kms. This was also fine but the next day we got distracted eating rib soup with Paul from the Steel Horse and then got stuck in huge amounts of traffic which left us with 700km to do on our last day, We had only ever done that kind of distance once before and it was in Africa with big long straight roads.

That day we left for Cartagena at 5am and finally pulled in at 8 pm making it a 15 hour, almost none stop, drive. But we had made it – the end of our South America leg! The next day we had to head straight to the port to sort out the shipping and put the bike in a container headed for Mexico! We had originally planned to go to Panama but sadly we had to re-route because of the trouble Nicaragua. We’ve written a blog about why we had to make that decision here.

So that’s it another continent ticked off. We’ve now racked up 18,000 miles, through 25 countries. across 3 continents. We should have the bike in Mexico around the 10th July when we’ll start racking up the miles once more!

Here’s all the highlights from this week: